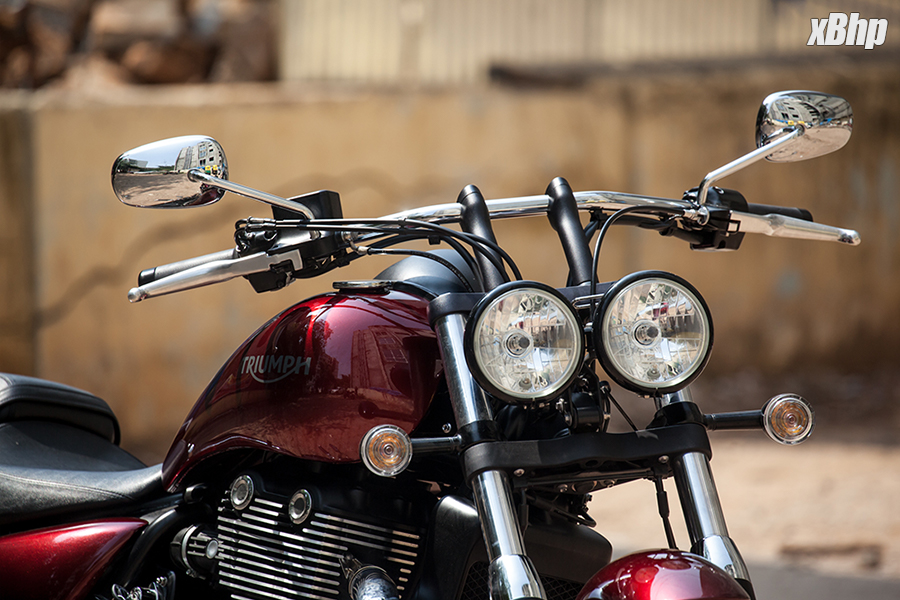 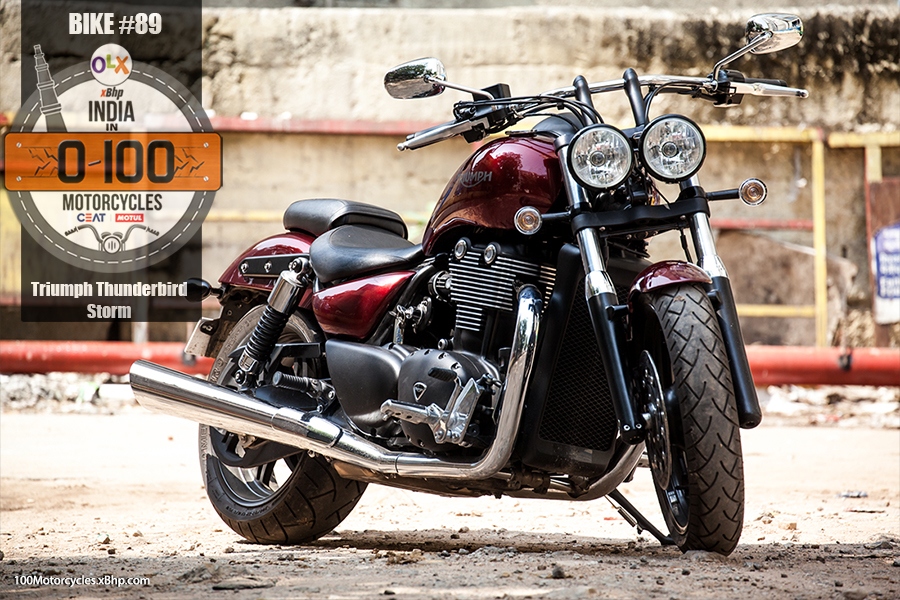 The Triumph Thunderbird Storm.This tempest in question is always raging black, with a few lightning flashes of chrome thrown in here and there. It is big enough to fill the horizon when seen from a low angle, does really sound like thunder and can wrist-roll a tornado a minute if desired. Thor would have found it a fitting chariot if he used one though I have no idea of how good it is at cold starting in really freezing conditions of Godâ€™s kingdom. 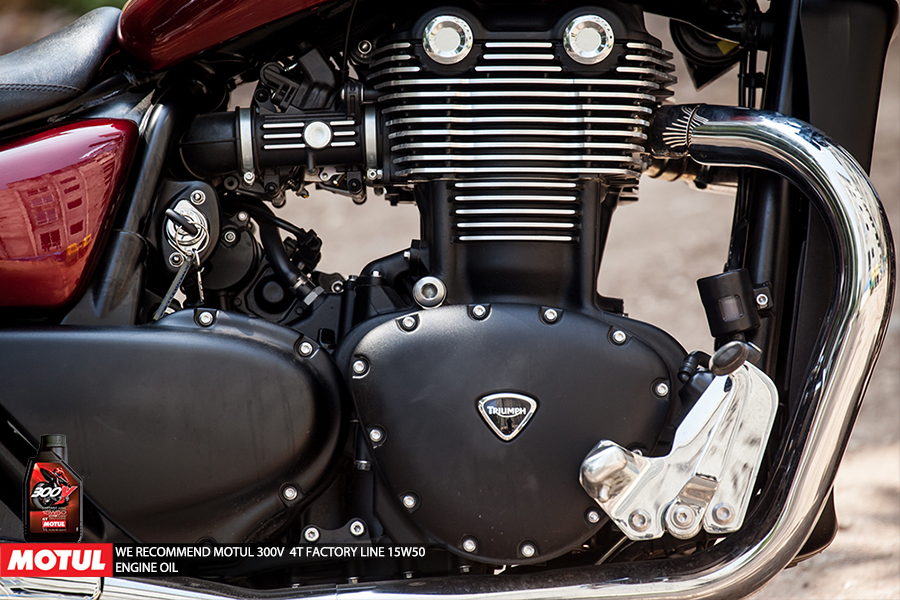 Triumph had the entire gamut of premium motorcycling worked out between its product spectrum â€“ right from the entry level Bonneville through the Daytona for the track, the Tiger for hard-core touring, the Street Triple for brutal fun and the Rocket III for two-wheeled insanity. Despite this impressive and extensive list, there was a gaping hole in the product line-up quite like the Ozone one above the poles of Mother Earth.Â  They needed a cruiser that could stand shoulder to shoulder, or preferably taller than the ubiquitous Harleys and the Thunderbird was the answer. 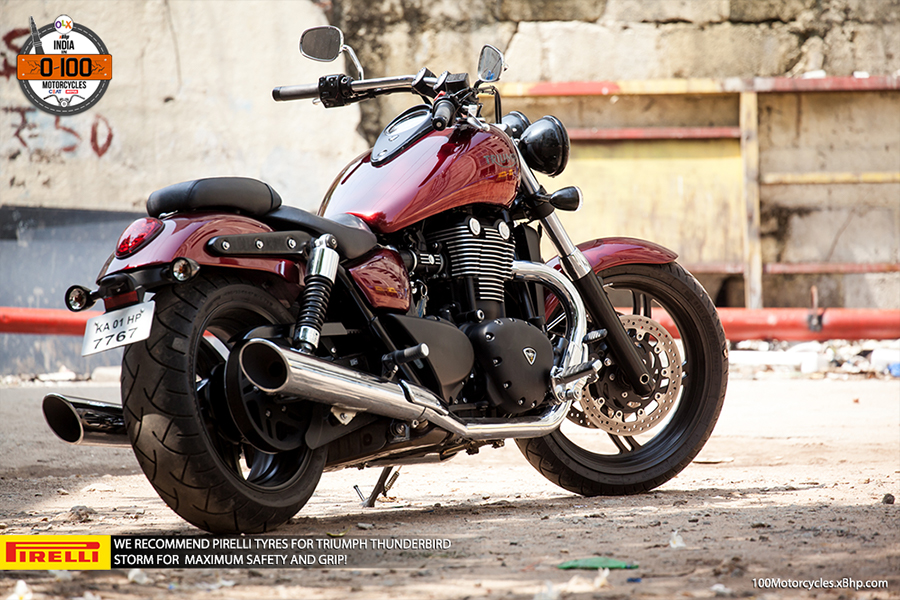 The bike looks a strangely oxymoronish (to coin a new term) mix of the compact and the massive. It is big and yet has compact proportions. It feels massive but feels pretty much manageable by an average-sized rider. The substantial tank (22 litres) dominates the visual lines viewed from top while the Street Triple â€˜bug-eyeâ€™ twin-headlamps and the straight bars stare back hard at you face to face. The bike looks all muscle, purposeful, strong and solidly built. 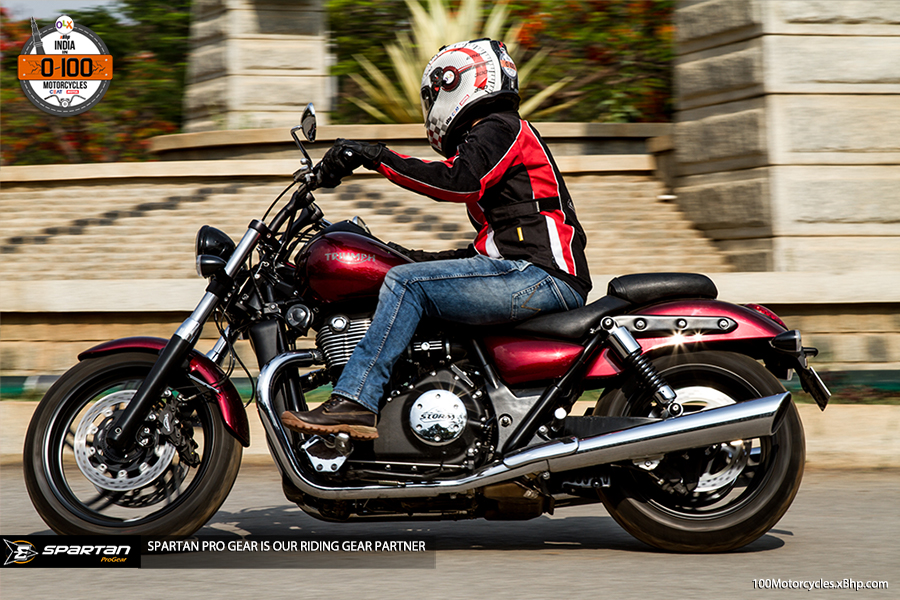 The literal and figurative eye of this Storm is its amazing engine, a 1699cc liquid cooled DOHC parallel twin. A 270o firing interval, 4-valves per cylinder and a short-stroke design gives it more than enough stomping power even with a relatively mild 9.7:1 compression ratio. The low compression ratio also means that here in India you can fill â€˜er up at pretty well any fuelling station and it will still run well. The 270ooffset firing order does necessitate the need for twin balancer shafts within but the engine response and the aural output is something the V-twin aficionados would die for. The engine starts to a low thrumble (a fusion of thunder and rumble huh!) and awaits that right-handed twist. Do that and the crackle is loud enough to announce your impending departure (or arrival as the case may be) to all and sundry within a quarter mile radius. The twin pipes sing in sync with the twin big pistons. Shift firmly into gear and get rolling. No, astride this gladiator in black, neither would you prefer a quiet exit nor will you be able to make it. You will blast off on loud thunder, carrying your own storm behind straight into the belly of the horizon. This bike pulls hard, as hard as those 97 horses on tap at 5200 rpm and the massive155 Nm of torque at a mere 2950 rpm respond to your right wrist. This is a cruiser with the heart of a sportsbike. The pull through the gears is relentless and so very addictive when accompanied by that thumpty-thump from the twin pistons chasing each other down below. The 6-speed gearbox might not be the slickest but youâ€™re too busy to notice such nitty-gritty, repeatedly rolling off and rolling on that throttle, just to feel your guts hit your spine and your ears full of that foot-tapping thunder. 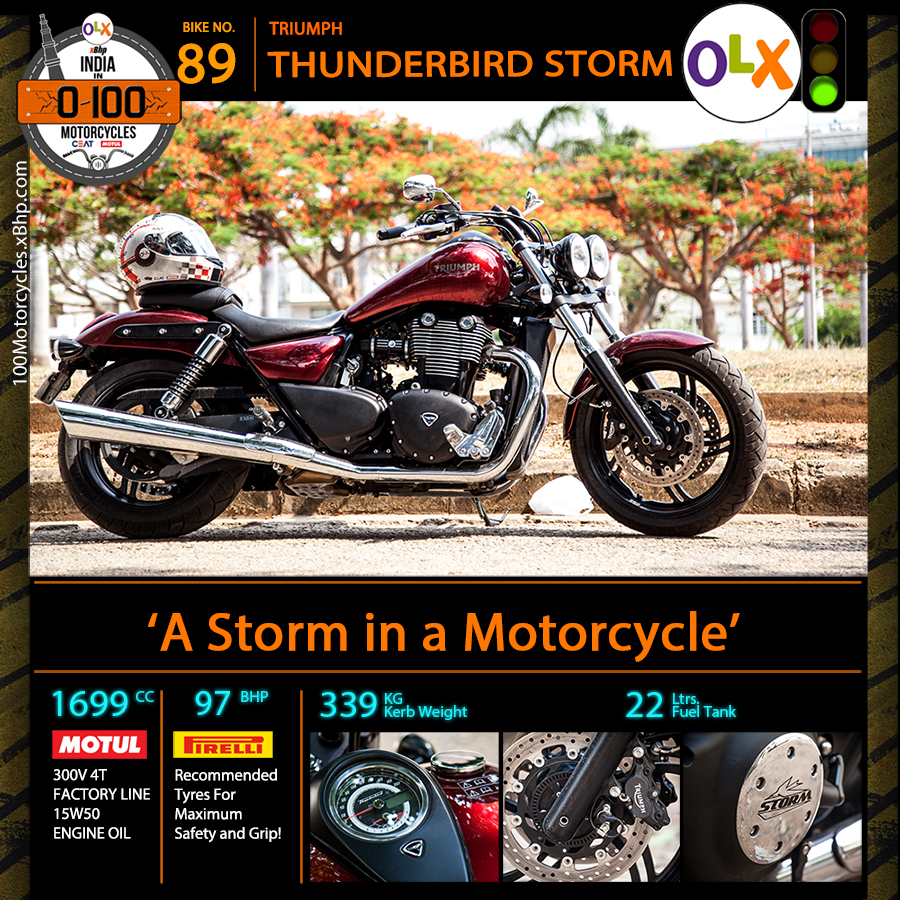 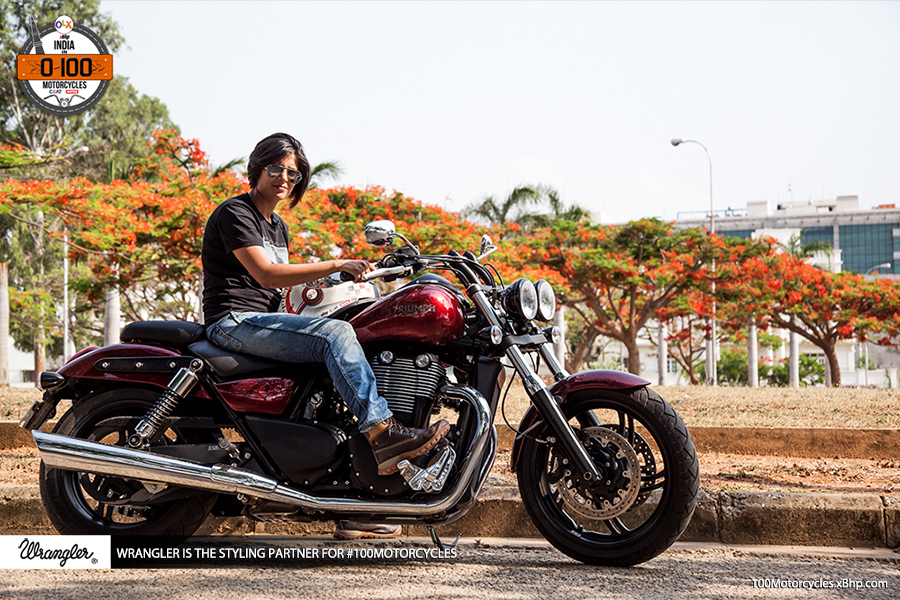 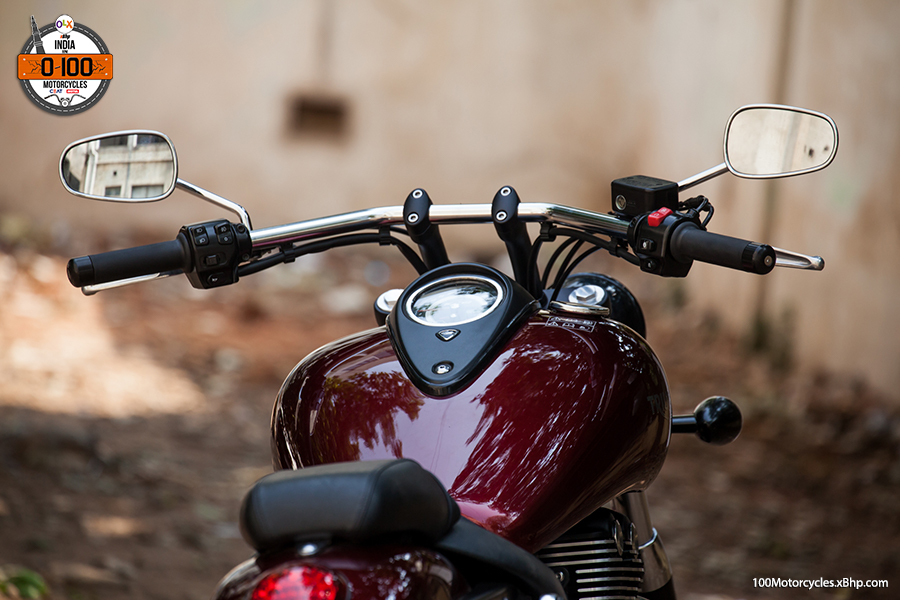 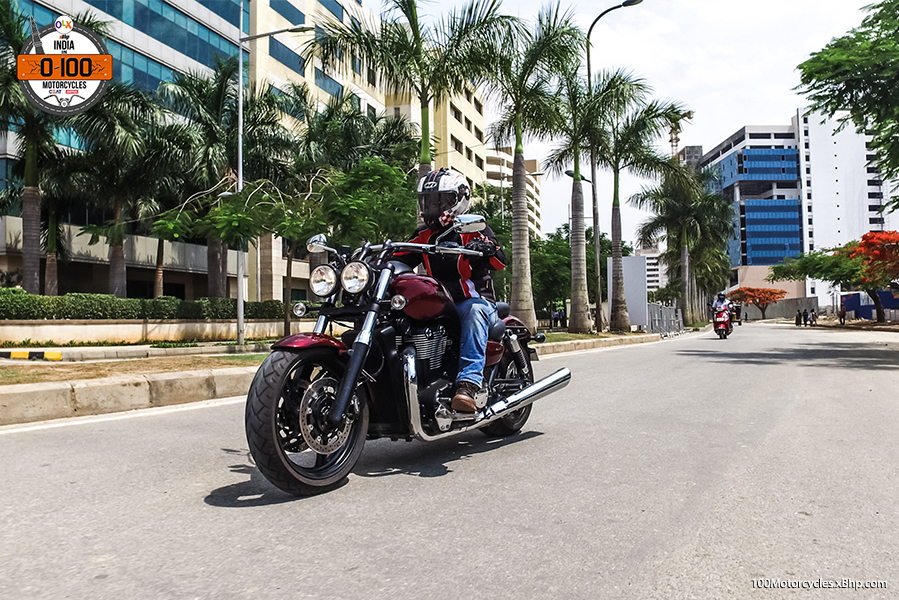 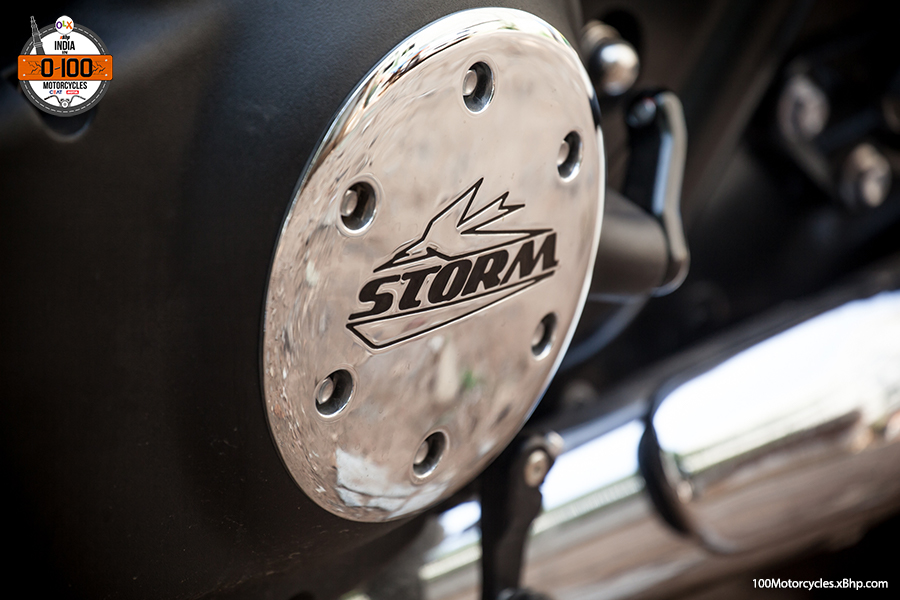 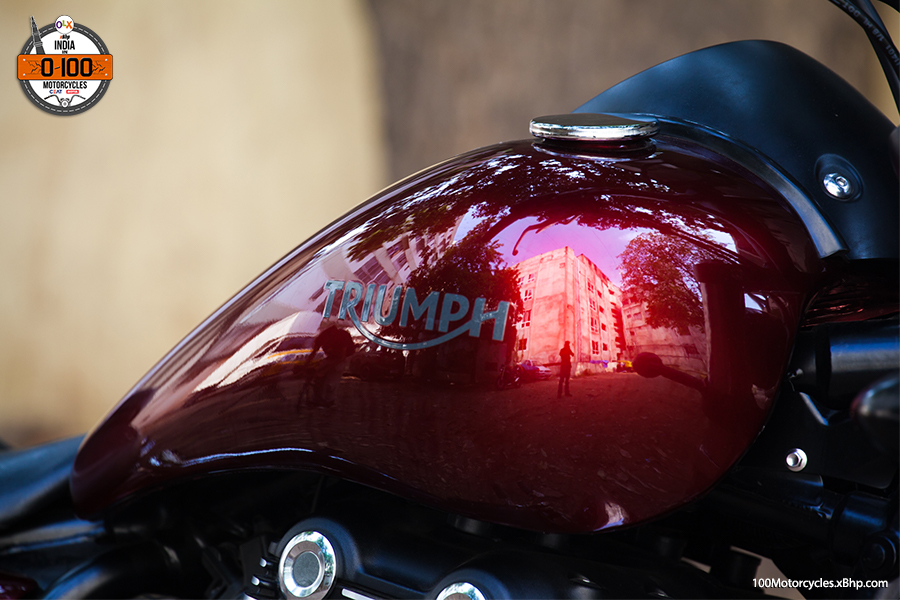 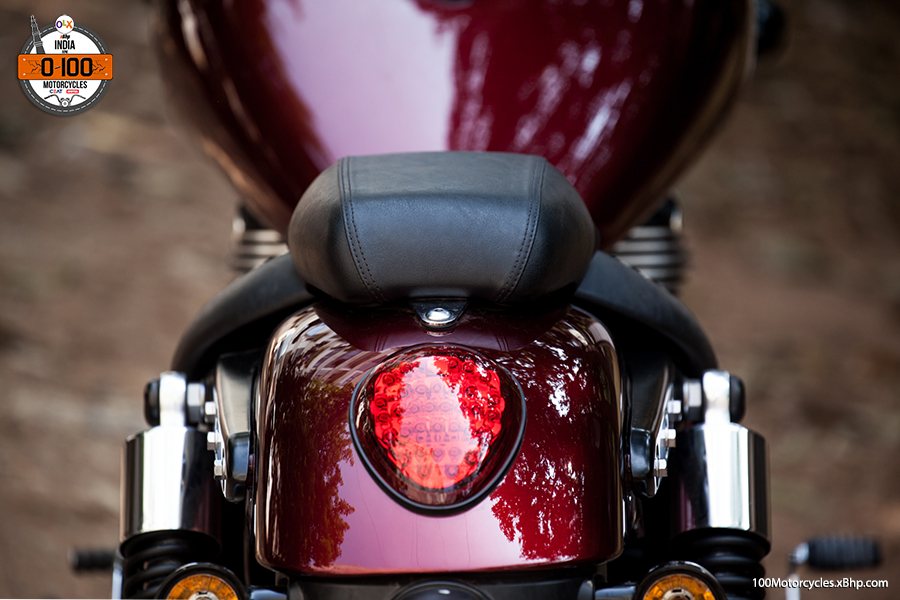 All said and done, this Storm is real â€˜value-for-moneyâ€™ in the price bracket it belongs. A no-frill all function cruiser that does not need those frills to be attractive. It is plenty already, just by being itself. Ever heard of Storms being pretentious huh?